Tofuku-ji temple is the head temple of the Tofukuji School of the Rinzai sect of Zen Buddhism. It was built in 1236 on the instructions of Kujo Michiie, the great statesman of the Kamakura period, who desired to build in Kyoto a temple complexes in Nara. Even its name, Tofukuji, is a combination of one chalacter from the names of each of these Nara temples. 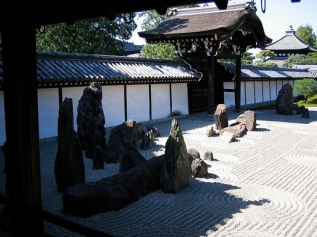 Its original buildings were burned but were rebuilt in the 15th century according to the original plans. About this time it flourished as one of the Five Great Temples of Kyoto. Its many compounds and sub-temples survived the ravages of war and fire until the late Meiji period when the Butsuden (Buddha hall) were burned. However, it even now retains the magnificent scale characteristic of a medieval Zen temple.